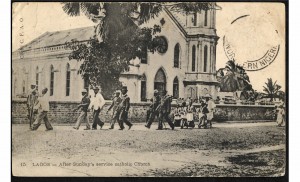 Nigeria is world’s most populous black nation. It gained independence from British colonial rule on the 1st of October 1960 after about 100 years of ‘serving’ the European nation. The British colonial reign actually started in 1885, but the country did not become a protectorate until 1901.

Six years after Nigeria’s independence, the country witnessed its first military rule when General Johnson Aguiyi-Ironsi took over the reign of power from the civilian government led by Sir Abubakar Tafawa Balewa, who was the country’s Prime Minister from independence.

One year after the first military coup, Nigeria suffered a setback as separatist movement later formed the Republic of Biafra, leading to a Civil War that lasted for three years. Nigeria has had series of military intervention since the first coup in 1966; but is currently under civilian rule.

Nigeria operates the Executive system of government where power is shared among three tiers of government; the Federal Government, the State Government, and the Local Government. This system is modelled after the American system, and was first introduced into Nigeria’s political destiny in 1979.

As a multi-ethnic confederation, Nigeria has a complex political setting, which led to an internal arrangement. That internal arrangement has further divided the country into six geo-political regions namely; South-South, South-East, South-West, North-East, North-Central, and North-West. With approximately 400 ethnic groups in Nigeria, and 450 languages; it became imperative for the Ibrahim Badamasi Babangida military government to divide the ethnic groups into these zones for equitable distribution of amenities.

Nigeria’s economy is about the biggest in Africa with about 7% annual growth. The country’s economy is built majorly on oil and agriculture; with more than 70% of its income being sourced from the former. However, the country could do better in a couple of areas in order to boost her revenue. Tourism for example remains a largely underdeveloped sector that the nation can benefit from. Countries such as Kenya, Seychelles, South Africa, and a host of others generate billions of dollars from tourism annually.

The Naira just like the American Dollar and other currencies is Nigeria’s symbol of pride. It was introduced in 1973 after the country took a decision to substitute the British Pound Sterling for its local currency.

The country’s Central Bank is authorized by the constitution to issue banknotes and coins. Banknotes are denominated in values which range from N5 to N1,000. Each of the notes bears images of past political leaders of Nigeria or significant historical sites such as the Zuma Rock in Niger State.

Tourism is one area that has not been fully harnessed by successive governments in Nigeria. It has the potential of sustaining or at the least taking the country to the height of one of the most developed nations of the world. It is a goldmine yet to be fully tapped; but it is not all that gloomy as both the private and public sector are collaborating to make things work.

Nigeria is blessed with beautiful beaches especially in the Southern parts of the country, the Mambilla Plateau in the North, rain forests, lakes, caves, highlands, lowlands, attractive vegetation, and a host of others.

The country is also blessed with rich cultural events that attract thousands of tourists and visitors to various regions, states, and locations every year. Some of these cultural and tourist events include; the Argungu Fishing Festival in Kebbi, Durbars in the North, Eyo Festival in Lagos, Sango in Oyo, Ofala Festival in the East, Orosun Festival in Idanre (Ondo State), Ojude Oba Festival in Ogun State, and a host of others.